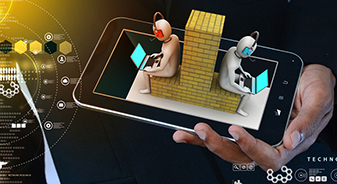 Data is the prime aspect on which technology thrives on and safeguards. Data transferring is one of the most time-consuming tasks and also an important part where developers require this function to test, run, integrate or even automate a particular software or technological device to a domain or a system.

Data transfer has proven to be highly beneficial not only to businesses but individuals as well in a quite similar way, data transfer extends the accessibility of data, safety and security of data and also increases the scope of usability of data not only across two smartphones but now also across different devices, solutions and even applications.

Data sharing amongst apps is one of the most new-age modes of data transfer and that is what we are going to focus on in this blog...

Let us go through the procedure of transferring data from an Android app to its App extension:

The mechanism of this task is more like a messaging system of sending and receiving messages.

Now, let’s not forget the IOS developers here is a brief tutorial of transferring data from IOS app groups to their extension through different methods:

There are various other ways of transferring data from one app to the other such as configuring app with secure filehandles through file providers, directories and ledgers, sharing data across devices, using cross-app communication technology such as ValueSet or even using basic activities such as copying, linking, embedding or merging commands. You can also use XML communicator or WCF to carry on data from one application to the other.

"Data sharing is one of the greatest boon of technology in today’s time, as important as data security and as technology and software advancements go on progressing in the race with time, there are going to be simpler and more user-friendly also development-friendly ways of data shifting making the technological world a smaller yet diverse domain, where accessibility and usability of data will be at the peek, increasing human ability towards Technology."

Data Transfer is one of the most valued benefits of technology, it reduces workload and efforts of shifting data and information, unlike the traditional methods. Due to the various advancements in the technological industry ways of transferring data are ever-evolving.